A few highlights from May, June and July: My apartment did get painted, and the floor did get refinished. This stuff was used for the floor, and I am really happy with it: AFM Safecoat Polyureseal BP Interior Wood Floor Finish. It’s more or less a water-based polyurethane, or akin to that, and caused no problems with fumes whatsoever. Even right after the three coats were applied, the smell was mild and nutty, not at all unpleasant, and the finish is shiny and seems very durable.
While the floors were being done, I moved to the empty apartment across the hallway. It was the world’s shortest move, from the door on the left to the door on the right. 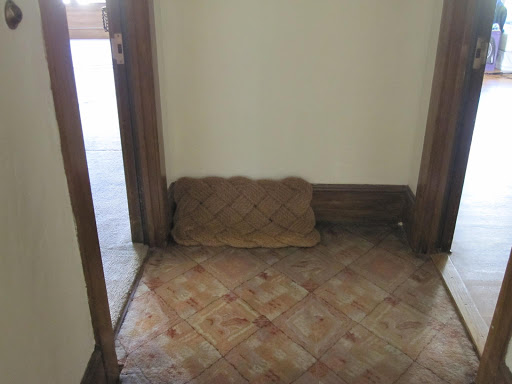 It was nonetheless a long day of moving. Even SpongeBob was near collapse. 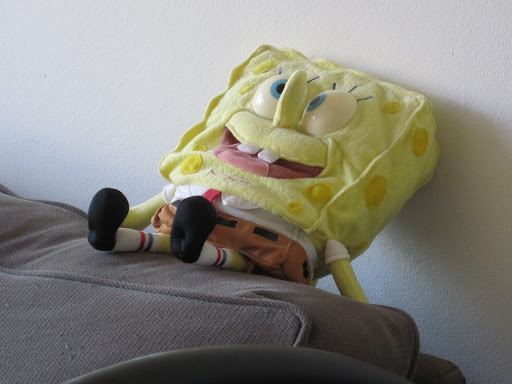 It was boiling hot many of the days that I was there, and the protests were raging outside, accompanied by the racket of helicopters overhead, but it was generally a pleasant, relaxed period: no computer.
Same stuff, different apartment: 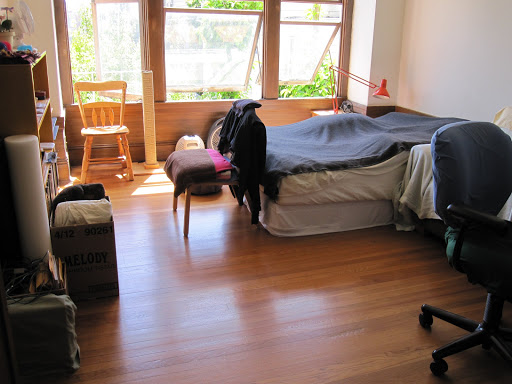 After the floors were done, I moved back to my place to find hardwood and/or drywall dust on every surface, including every item in the uppermost cupboards in the kitchen, which had been closed, and all the windows, including the outsides of my living room windows. I spent many hours cleaning up. The ceremonial transfer of my grime-encrusted shower curtain from the neighbor’s place back to its ancestral home was a stirring moment.

I ordered a new bed—a simple wooden platform and a latex mattress—from Savvy Rest, along with three different pillows. Expensive, but I wanted my new cat, should such be obtained, to have something really nice to shred. As the King has observed, you can have nice furniture or you can have a cat, but you can’t have both. Also, since I spend so much time sleeping, I wanted to have something that was free of toxic chemicals, which these items are, or as close as you can get. I am happy with them, and Savvy Rest’s customer service is outstanding.

The refinished hardwood looked gorgeous, though I was shocked at how it highlighted every speck of dust and every piece of hair—formerly, all that crud had disappeared gracefully into the carpet, which I sometimes went six months without vacuuming, since a carpet that hasn’t been vacuumed for six months is indistinguishable from one that hasn’t been vacuumed for two weeks. Shocking to think how much debris must have been in that carpet by the time it was ripped up. It was not new when I moved in, and that was 22 years ago.

A woman from a cat rescue place came one day and took all of Hammett’s leftover food and medication. Many, many tears were shed for Hammett; at other moments, I was doubled over in pain over my deceased family member.

I aspired to go out for a walk every day, but a lot of days it just seemed easier to remain inside my pleasure dome, and it still does.

As for getting a cat, I was ambivalent. I was able to have all my windows wide open, and the breeze and fresh smells of the outdoors were so lovely. It was clean! It was quiet. It was peaceful. Having a cat in San Francisco is expensive. And the SPCA’s process for getting a cat proved to be rather daunting. It was no longer possible to go there and let your eye fall on the just the right cat. Their website basically said that one kitten is pretty much like any other, so just pick one you like the looks of, and they’d convey it into your care while maintaining social distancing: there would be no opportunity to meet the cat before taking it home.

Nonetheless, I started keeping an eye on their website and applying to “meet” (not actually meet) this or that black kitten. Sometimes a very cute cat disappeared from the website several hours after it appeared there, meaning it had physically been taken off the SPCA’s premises. The difficulty of the process burned away my ambivalence and soon I was applying to not-meet cats left and right, and that’s how I ended up in my current predicament.

A few days before I adopted Duckworth and Howie, I went to the Dolores Street Hill Bomb, which was really, really fun (though I learned later that it had spanned three days this year, and the day before I attended, someone was killed). It was mostly young men sailing down the hill from 21st St. to near 18th St., and they were mostly on skateboards, some holding an open beer, some puffing on a joint as they flashed by. Some were on bicycles—one fellow was standing entirely atop his bike, with one foot on the seat and one on the handlebars. Dazzling! A few were girls. When one lady skater went by, her friends shrieked encouragement: “Go, bitch!” Near home, I saw a couple of little kids sitting with their skateboards on the sidewalk. I said, “Thank you! That was really thrilling.” The face of one of them lit up.

This is the only photo I took that actually has a skater in it: 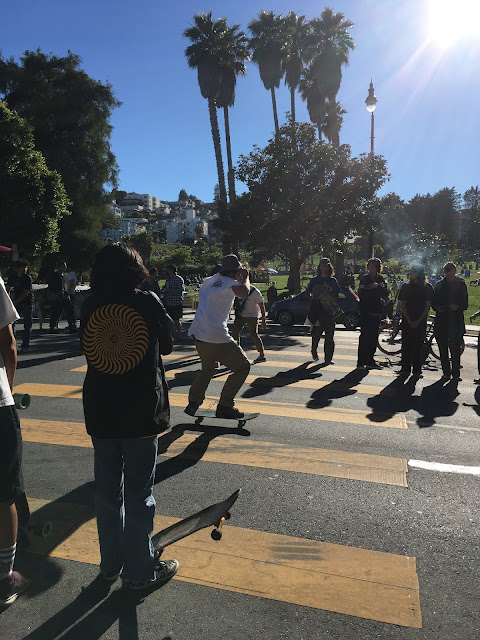