Last Sunday morning, I was making a pot of beans, starting with peeling and mashing a clove of garlic or two. Let me mention right now that no cat was harmed during this incident. By my foot was one cat or the other; I have to get a close look at them to tell them apart. I figured that was all right, that the worst that could happen was some debris falling on the cat. I mean, it wasn’t like I was going to drop the knife on the little creature.

Moments later, I dropped the knife. I do not recall ever dropping a knife before.

The knife, a small but evidently freshly sharpened paring knife, landed just a couple of inches from the cat’s face. Where it exactly landed was on my foot, apparently having fallen with the blade pretty much horizontal. (I don’t know why it didn’t flip over so that the heavier side was facing down.)

I looked down to see more or less this, except that my Birkenstock Mayari was still on. I couldn’t tell at first if the cat had been sliced. 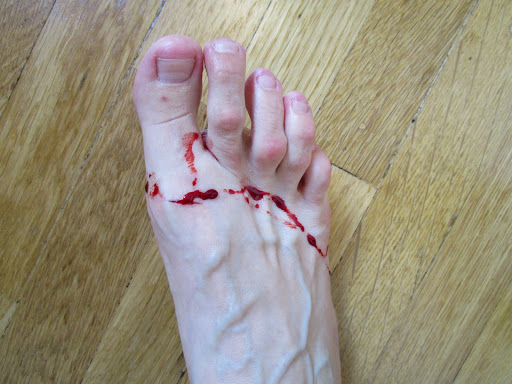 After I saw that the cat was evidently fine, my next thought was to put both cats in the bathroom so I could deal with the blood, and so they wouldn’t lick the wound and develop a taste for human flesh. Rounding them up, I dripped blood all over my apartment. There were about ten things like this: 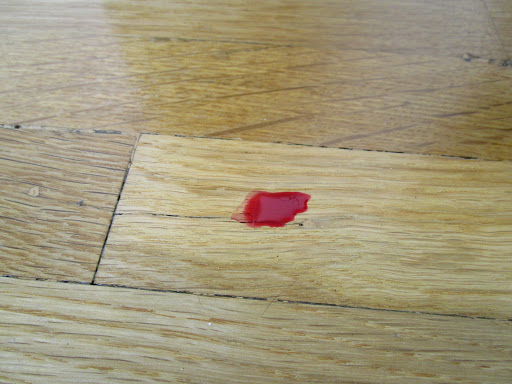 I could literally have killed my cat, or blinded it, or caused a horrible wound. Needless to say, no cat is allowed to sit there while I’m using a knife from now on.

I am so glad I didn’t hurt one of my kittens. I am also glad I no longer have white carpeting.